The new Perkins&Will-designed Green Line elevated train station at Damen Avenue and Lake Street leverages design to provide a convenient, affordable, and attractive transportation amenity for the community. The station, planned to open in 2020, will make it easier for people to get to and from work, school, and other destinations, as well as facilitating connections for visitors to the neighborhood arriving for sporting events, meeting friends, or accessing the Illinois Medical District, and local businesses. The first public images of the new station were unveiled July 9 by Mayor Rahm Emanuel and officials from the Chicago Department of Transportation (CDOT), the Chicago Transit Authority (CTA) and Ald. Walter Burnett of the 27th Ward. The civic-minded station features elevated glass towers and a grand staircase, and is topped by a glass-enclosed bridge with exposed green steel trusses connecting inbound and outbound passengers, while providing spectacular views of the downtown skyline.

“CDOT is excited to share the design for the new station with the near West Side community,” said CDOT Commissioner Rebekah Scheinfeld. “This new state-of-the art, multi-modal transit station puts the ease of the passenger experience at the core of its design. It will allow users to seamlessly connect with buses, or to use bikes or walk to nearby destinations. It will support local neighborhood growth as well as have the capacity to serve large crowds attending events at the United Center.”

“We are excited to be a partner with the City of Chicago to bring our global design experience to deliver the greatest value for community investment in public transportation,” said Douglas Smith, Managing Principal of Perkins&Will. “The Green Line station will draw on the lessons we have learned in designing transit projects from Vancouver, British Columbia to Chongqing City, China, but will reflect the specific needs of CTA passengers in Chicago and West Side community.”

The Green Line station will draw on Perkins&Will’s history of design excellence in public transportation, focusing on the passenger and community user experience. The concepts of transparency and open plan will result in a station that is safe, where patrons have clear site lines within the station and to and from the street, supporting its use at all hours of the day and night. The station materials and design elements were chosen and arranged to enhance and simplify the user experience of the facility. Design of the circulation spaces – public spaces, entrances, stairs, escalators, elevators – will be laid out to encourage intuitive wayfinding for users and to provide easy access to local community amenities, pedestrian and bike paths and other modes of transit.

The grand stair and escalator will guide arriving passengers up to the platform level, where the glass bridge will facilitate connections between train platforms. The green trusses along the bridge reflect the name of the CTA line and are a dynamic reference to the famous steel bridges throughout the city and a memorable icon for the station.

“Residential, industrial, sporting, educational…when you think about all that that’s in this space, I cannot think of a better company than Perkins&Will that are doing stations around the world, founded here in in Chicago, located here in Chicago, to do a world-class new station,” said Mayor Emanuel at the unveiling.

Projects recently completed or in design include: prototype stations for one of the world’s largest systems currently under construction, the Riyadh Metro and BRT; built stations for both Vancouver Metro’s Autonomous SkyTrain System and Sound Transit’s Eastlink and Sounder Commuter Rail lines; design for the new Réseau Express Métropolitain (REM) in Montreal, where Perkins&Will is partnering with local firms Lemay and Bisson Fortin to deliver 26 stations on the 40-mile line; and growing North American high speed rail expertise for both California HSR in Sacramento and Bakersfield and for Texas Central Partners’ new system connecting Dallas and Houston. 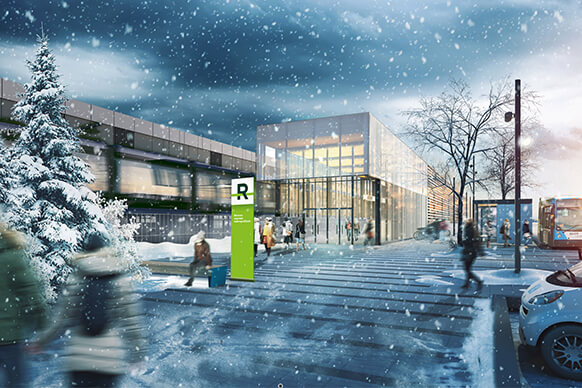