Martin Selig Real Estate bought Seattle's 1913 Federal Reserve Bank and hired us to revitalize it and build a sizable addition.

Seattle, Washington
Banking on the Past

Built in 1913, Seattle’s Federal Reserve Bank building acts as a window to the past in a city typically defined by its progressive, forward-thinking culture. So when Martin Selig bought it at a government auction in 2014, he aimed to update it for contemporary use while preserving those historical links. But as both a national landmark and an official Seattle landmark, upgrading the city’s historic building was a particularly difficult mission. He hired our Seattle studio, a frequent design collaborator, to revitalize the iconic stone box with a modern addition and new amenities.

The design for the project had to be sensitive to specific requirements on both the federal and state level, which don’t always align with each other. Our team worked to find the right balance between old and new. The renovation includes a glass addition that appears to float over the existing historic building. “The cantilevered relief between the two is really eye-catching,” says Erik Mott, Design Co-Director of our Seattle studio. “But the whole building has a real presence to it.” The glass addition appears to float over the stone building and shares its exact dimensions.
Respecting History

On top of constructing the addition, Selig also hoped to update the building so that it could survive another century. The 1913 building had been renovated only once in its lifetime, in 1950, but otherwise left untouched. In 2008, it became vacant for nearly a decade before its modernization. To honor its history, stone and brass finishes from the original renovation were salvaged and repurposed. Two new elevators were added, and the existing ones were refurbished and widened. Inside, the team refurbished and widened the elevators while also adding two new ones.
“Erik and his team are superior. We came together to do a great building and we did just that.” The bank's exterior limestone cladding was removed, treated, and re-installed to ensure the building was up to today's earthquake codes.
Seattle’s Forward-Thinking Culture

Seattle may be a newer city, but its population is adamant about preserving what history it has. “There’s this sort of brinkmanship negotiation between well-meaning preservationists and the more ambitious developers to find some common ground,” Mott says. “On this project, however, we wanted to figure out a way to preserve what’s important while weaving in modern resilience and sustainability solutions.” For example, the bank’s exterior limestone cladding was removed, treated, and re-installed to ensure the building was up to today’s earthquake codes. “It’s the original material and looks the same,” he explains. “But it’s safer.” The team also quantified how much carbon is already embodied in the original building and repurposed original materials wherever possible to lower its footprint. A life-cycle analysis, conducted at the end of construction, found that preserving existing building materials saved approximately 50% of the building’s global warming contribution compared with projects of similar size and complexity. Amenities in the new glass addition include terraces that over look the city's skyline. Identical in shape and dimensions to its stone counterpart, the new glass box rests atop the original structure. A second glass volume extends down the back of the building and includes brand new retail access from the street level. Designed to accommodate a wide range of uses, the addition includes tenant terraces and a roof deck that further connect people with the city. “It was a challenging but fun job,” Selig says. “Erik and his team are superior. We came together to do a great building and we did just that.” The building is attached to a separate glass volume that extends down the entire building. 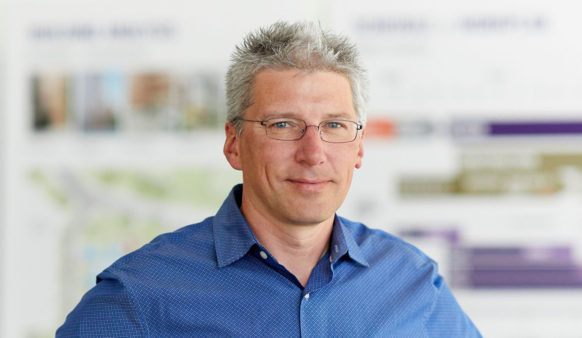 People
Ed Palushock
Back to top