We applaud Kenneth Luker, design principal in our North Carolina practice, for winning the 2019 Kamphoefner Prize from the North Carolina Chapter of the American Institute of Architects (AIANC).

The Kamphoefner Prize recognizes a commitment to the fundamental principles of the modern movement in architecture. The award was named after Henry Kamphoefner, the founding dean at North Carolina State University’s School of Design, which gained national prominence under his leadership. Kenneth is known for weaving cultural awareness into the design of the built environment. He joined the Freelon Group in 2006, which became part of Perkins&Will in 2014, and leads the design process on projects such as museums, libraries, higher education institutions, corporate offices, healthcare, and science and technology centers. His work has garnered numerous awards and has been featured in publications for beautiful and engaging designs that connect architecture with its cultural context.

“Through thoughtfully composed architecture, Kenneth celebrates and dignifies people and events. This goes well beyond the stylistic expectations of the Kamphoefner Prize, and it illustrates modern architecture’s potential to engage communities, reflect on history, and promote social progress—all while elevating human experience.” —David B. Hill, FAIA, Professor and Head of the School of Architecture, NC State College of Design

Luker submitted a strong portfolio of work to AIA North Carolina that demonstrated  meaningful design in the service of society rather than following trends or fashion. National Center for Civil and Human Rights
Inspired by urban spaces from around the world that are synonymous with historic civil and human rights events, the iconic form is defined by two bold, curving walls that create and define a Space for Action while the varied earth tones of the exterior cladding celebrate human diversity. “Each of these projects has impacted my perspective on the potential for architecture’s positive influence on people. I’ve learned that aspirations, values, and priorities become manifest in what we build, reflecting how we understand the world to be and our aspirations for what we wish it to be.” —Kenneth Luker NC State Gregg Museum of Art and Design
Inspired by patchwork quilt patterns represented in the museum’s collection, the design was conceived as a collection of interior and exterior galleries stitched together through spatial connections. 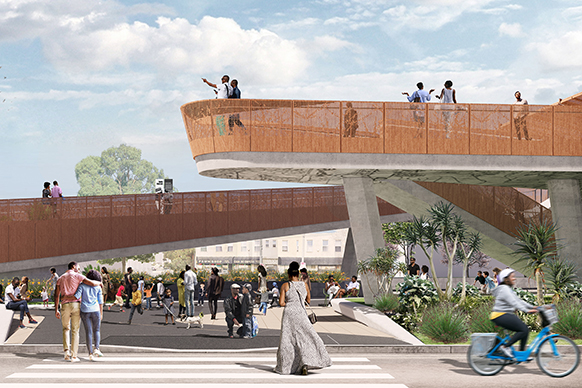 Destination Crenshaw
This project will be an art and culture experience celebrating the social and cultural contributions of the African American community of Los Angeles through public art installations, exhibits, new pocket parks, and new streetscapes.

“Kenneth’s leadership in elevating the design quality of our projects and his thoughtful approach to articulating clients’ stories has been very impactful. This well-deserved prize is a testament to the talent and inventiveness Kenneth brings to each of our projects.” —Zena Howard, Principal and Managing Director, North Carolina “Quality work is never a solo act. For each project, I have had the great privilege of collaborating with many talented designers and passionate clients.” —Kenneth Luker People
Kenneth Luker
Back to top