Second, the magazine Healthcare Design named the project a winner of its 2017 Remodel/Renovation Competition in the Cancer Care category. The award recognizes the best renovations of cancer care centers and public healthcare spaces.

“We are honored and humbled by these recognitions,” says Carolyn BaRoss, global healthcare interior design director at Perkins&Will. “But more important, we are grateful to have been able to make a positive difference in the lives of MSK’s courageous patients by creating a more comfortable and manageable cancer care experience.”

MSK Monmouth, which opened in December 2016, represents a dramatic repositioning of a vacant 1980s suburban office building into a world-class cancer care center. What started as a 400,000-square-foot rectilinear office building with little to no natural light at its core and obstructed shared views to the outdoors is now a light-filled, welcoming space with curved interior walkways and views to nature around almost every turn.

Using evidence-based design principles, Perkins&Will created for MSK patients, their families, and staff an inviting, soothing, and uplifting environment that addresses their unique needs and sensitivities at every phase of treatment. To accomplish this, the interiors draw on elements of hospitality, with parlors, dens, and libraries stocked with bookshelves replacing traditional waiting rooms. The team also reimagined the physical areas where cancer patients feel most vulnerable, including infusion therapy suites and changing, exam, and consultation rooms, paying special attention to find ways to preserve patient control and dignity. Additionally, each of the 18 infusion bays faces a window to the outdoors and provides a direct view to wooded nature – a rare bonus for patients who typically undergo hours of chemotherapy in dreary, artificially lit, interior spaces. Wi-fi connectivity and adjustable lighting and temperature controls in each of the infusion rooms give patients a bit of added comfort. 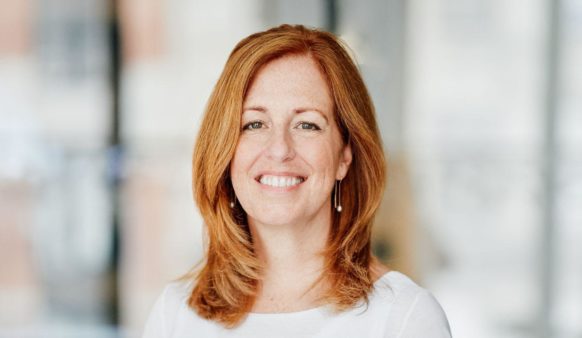 People
Carolyn BaRoss
Back to top