Perkins&Will celebrates its 10-year milestone named as one of Canada’s Greenest Employers by Canada’s Top 100 Employers 2018 competition. The architecture and design firm has a long history of sustainability leadership that includes the promotion of environmental awareness in its workplace culture.

The firm’s commitment is demonstrated in a number of initiatives such as alternative transportation subsidies, cycling facilities, composting and landfill waste diversion programs, sustainable product procurement, and an employee-managed organic rooftop garden. The office has achieved LEED® Existing Buildings: Operations and Maintenance Platinum Certification, hosts a living green wall to improve air quality, and operates with passive ventilation during the summer months.

“Environmental leadership has always been an integral part of our culture and everything that we do,”  says Susan Gushe, Managing Director of Perkins&Will’s Vancouver office. “Whether it’s a building we design or in our own operations, we continue to strive to not only have a positive impact on the environment, but promote well-being in the workplace.”

Over the past 10 years, Perkins&Will’s initiatives have expanded to include workplace well-being, pledging to certify all its North American offices to the Fitwel standard. The office encourages health and wellness with active design through interconnecting stairs, open daylit workspaces, fitness benefits, and yoga classes.

Further demonstrating their commitment, the firm employs over 1,000 LEED accredited professionals worldwide and encourages LEED certification within 6 months of hire. Other paid courses include a Passive House certification course hosted in-house annually that has resulted in the addition of 16 Certified Passive House Designers on staff.

Having received over 70 green building awards, the office continues to lead in sustainable design through its work on projects such as Marine Gateway – the first mixed-use livable community of its scale in North America that integrates transit, and VanDusen Botanical Gardens Visitor Centre – the first Living Building Challenge certified project in Vancouver. Current projects include West 8th and Pine – a mixed-use development that endeavors to comply with the City of Vancouver’s new Zero Emissions Building Plan and is participating in the Canada Green Building Council’s Zero Carbon Building Pilot Program.

The firm is also committed to a number of project initiatives including Transparency – the first publicly released Precautionary List of substances commonly found in building materials, and the 2030 Challenge with the creation of the 2030e2 energy estimating tool for energy efficient buildings.

In addition to Canada’s Greenest Employers, Perkins&Will also celebrates its sixth consecutive year named as one of British Columbia’s Top Employers. Among the reasons for the firm’s selection are tuition subsidies, referral bonuses, year-end profit-sharing for all employees, and matching RSP contributions. 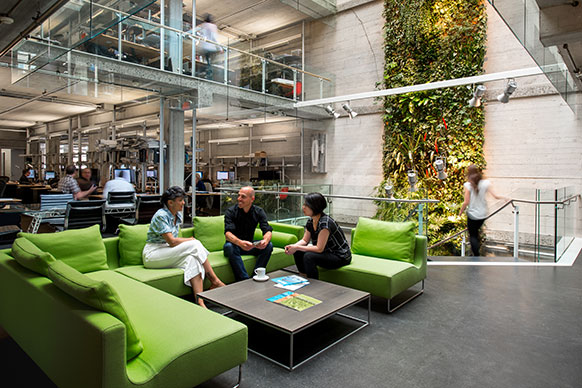