Dwight has always loved to draw.  From an early age that love of drawing, combined with a curiosity for how things were made and functioned, expanded his creative horizons into building models, woodworking, and even tinkering with cars. This quickly led to a passion for architecture—fortuitously leading him at seventeen to work for a central valley architect and former apprentice of Frank Lloyd Wright and Bruce Goff: Arthur Dyson. Working for Dyson was a transformative experience for Dwight–it was very different from the boredom of high school drafting class–and learning from someone so interesting, idiosyncratic, and inspiring was an experience that has influenced his work to this day.

Dwight stayed in Dyson’s office for the next eight years before attending Berkeley and then Harvard’s Graduate School of Design.  Upon returning to the Bay Area in 1993 he went to work for Peter Pfau, later becoming a partner in the firm Pfau Long Architecture.  In his spare time Dwight still likes to draw, make things, play the guitar, and travel with his wife and son. Lick-Wilmerding High School
Dwight's love of creating and building makes this a special project to him. It's only fitting that this distinctive industrial arts school would have the motto: “Education for the Head, Hands and Heart.”

“Here’s one way to expand a campus: Slice into the earth and insert glassy studios along a walkway open to the sky, framed by older structures. That’s how Pfau Long Architecture satisfied the need for extra space at this private high school emphasizing the technical arts. What’s important isn’t the cool factor; it’s the way truly innovative architecture can take unexpected forms and, in the process, energize everything around it.” Golden State Warriors Office Towers
The two towers will have a distinctive presence on the San Francisco skyline, and create a strong sense of place surrounding the event center. 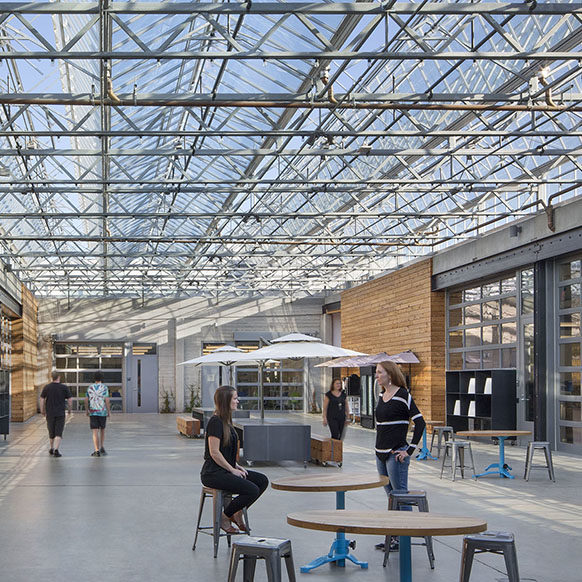