We’re serving as planners, urban designers and architects for the San Francisco Giants as they move to create an entirely new, dynamic, public destination neighborhood directly at the intersection of Mission Creek and San Francisco Bay.

Mission Rock will be a new mixed-used neighborhood consisting of 8 acres of new public open space, approximately 1,500 new rental homes with 40% affordable to low and middle income families, and small retail shops and cafes. The project is estimated to create 13,500 construction jobs and 7,000 permanent jobs, and generate over $25 million annually in new revenue for City services, and that’s just the beginning.

The project will also include sea level rise resiliency and adaptation features, ensure the historic rehabilitation of Pier 48, and improve public waterfront access along the Blue Greenway Trail. The San Francisco Giants and Tishman Speyer are the lead developers for the project and are working closely with the Port of San Francisco and the City. It is anticipated that construction will be completed and full occupancy will take place by 2025. Embracing Mission Creek and its entry to the Bay, the frame extends the ballpark’s Port Walk across Lefty O’Doul Bridge, along the Great Lawn, and out into the Bay with Pier 48.
Renderings produced by Steelblue
“Mission Rock puts affordable housing, parks and open space, and thousands of jobs in the right place for San Francisco. It’s an exciting project that adds so much to San Francisco without displacing anyone.”

Resiliency at the Rock
The whole of the site is a performative landscape raising all of the occupied space by 66 inches to meet the 2100 forecasts. The trick is to make the development something that is beautiful and useful before and after the anticipated change in sea level. However, the evolution in function needs to occur in a way that doesn't deter people from coming to the waterfront and enjoying what it has to offer. For example, elevated loading docks and sidewalks have been incorporated in the development’s design for future use as pedestrian walkways as water levels rise. Creating myriad ways to experience the Bay, the district’s design treats the waterfront as a dynamic boardwalk specifically tuned to memorable views and links it to Pier 48.
Renderings produced by Steelblue Mission Rock’s interconnected open spaces link with the surrounding open space fabric in all directions, completing much of the City’s larger vision of its emerging waterfront public realm.
Renderings produced by Steelblue
What Makes it Cool
Mission Rock will create an entirely new dynamic, public destination neighborhood directly at the intersection of Mission Creek and San Francisco Bay. Mission Rock will have 79% less CO2 emissions than equivalent developments in the United States. It will also have an on-site plant to recycle water. This plant will allow 100% of the project’s non-potable water demands, including watering eight acres of new public space, to used recycled water. Mission Rock was an actual rock formation in San Francisco Bay, an obstacle to watercraft navigating the coastline immediately east of the site in the 1800’s. In the years since, the waters of Mission Bay were filled and Mission Rock became the foundation for Piers 48 & 50.
Renderings produced by Steelblue 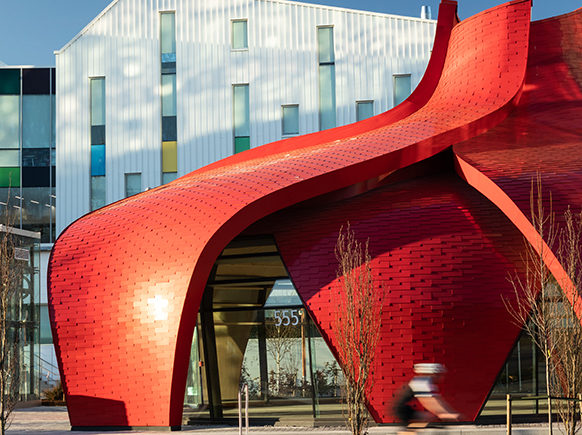 Area of Expertise
Corporate Office
Back to top
We use cookies on this site to enhance your user experience. By using this website, you accept cookies. We do not store your personal details.Ok, I agreeMore Info