In August 1954, the city of São Paulo created one of its most celebrated landmarks, Ibirapuera Park. Designed by Oscar Niemeyer, the park, an icon of modern architecture, is one of the most popular destinations in the city and the epicenter of the surrounding neighborhood’s development. Sixty-eight years after the park’s inception, we have raised the bar on the region’s high-end residential architecture with Oscar Ibirapuera, one of the most impressive residential projects in the high-end São Paulo market.

With a permanent view of the city’s most vibrant green area and designed for Trisul development, the project offers apartments with 186 m², 227 m² or 233 m², with three or four bedrooms and up to four suites. “The floor plan was conceived so the living room could ofer nine meters of clear spans, providing a panoramic view of Ibirapuera, something unique in the city,” says Douglas Tolaine, design director at Perkins&Will. Organic shapes repeat through the covered walkway, the skylights, and the outdoor pool. The movable brises-soleil, made with beveled wood panels, offer a contemporary reinterpretation of this feature widely used in modernism to protect interiors from sunlight while adding a lively feel.
Contemporary modernism

The Oscar Ibirapuera aesthetic is guided by reinterpretations of elements recognized as hallmarks of Brazilian modernism, such as roofs supported only by columns, organic shapes, and brises-soleil on the facades. Grounded in architectural tradition, Oscar Ibirapuera translates contemporaneity into timeless style, just like the park that surrounds it. The common areas include a double-height banquet space, outdoor and indoor pools with a 20-meter lane, a solarium, dry and wet saunas, a spa, a fitness room, a pilates room, a playground, a play room, a game room, and a bike rack.

Oscar Ibirapuera provides the innovation and urbanity that high-end projects demand while offering a serene and immersive experience near the city’s largest green area. Careful space planning and incorporation of the surrounding landscape excites the senses while evoking permanence. The panels reappear on the ground floor as a wall finish, contrasting with a wide geometric lattice and accentuating the rhythm of the passage areas. 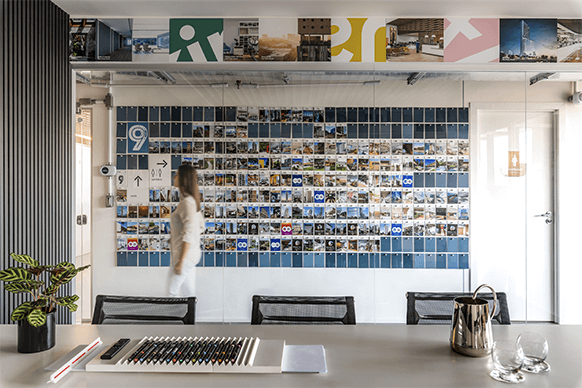 Work
You, Perdizes
São Paulo, Brazil
Back to top